Do you remember a PC operating system used in the dim and distant past called Windows XP? Microsoft stopped supporting it several years ago which means no patches will be released to fix security vulnerabilities.

Even so, according to the latest figures, there are still thousands of computers running on XP. A freedom of information request by the BBC found that 20% of computers used by Greater Manchester Police were running XP, but the majority of police forces refused to disclose their numbers, citing security concerns. This probably indicates many forces still have computers working on XP.

What is Wrong With Windows XP?

As an operating system, XP was reliable for many years, so there was no inclination to update it for performance reasons. However, Microsoft moved on so no longer supports XP. This means security updates are not available, so if gaping great security holes are found, they will not be filled. An XP PC is therefore much more vulnerable to malicious software.

For an organisation to change all their PCs can incur large costs and this is particularly relevant in the public sector with spending cuts. There may also be some organisations using bespoke software that also needs to be updated if the XP computers are replaced, meaning they will experience an even greater cost.

However, this does need to be weighed up against the potential price of a security breach. This cost is often not considered because it is unquantifiable. There is also occasionally an element of heads being buried in sand when security breaches are discussed.

Some organisations have XP computers running specific tasks on factory machinery. In these instances, it would be a larger task than just replacing the PC. Many of these computers do not have access to the internet and USB devices should have been disabled, so the chances of them sustaining an attack from malicious software are tiny. 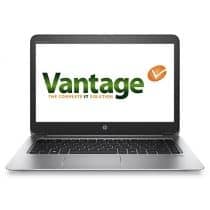 If You Still Use XP, What Should You Do?

This depends what the computers are being used for and what the security risks are. If there is the possibility that computers you are using could suffer a malicious attack, then action needs to be taken now.

The cost of replacing computers may be seen as a barrier, but the price of an organisation suffering an attack could be huge, both financially and to reputation.

There are many benefits to upgrading to the latest Microsoft operating system, Windows 10, which we covered in a previous blog.

For advice on your computer and a free IT audit, please contact Vantage IT today.