Earlier this week, Microsoft launched its latest Surface Pro 2-in-1 laptop. It is the first refresh to the company’s popular line of hybrid PCs since October 2015 and it will be available to purchase mid-June.

The concept behind the new Surface Pro is the same as its predecessors. It is essentially a high end touch screen tablet that can also function as a laptop when using the optional cover with integrated keyboard.

That means it is still lighter and easier to carry around than most conventional laptops, yet it is equally powerful due to the latest Intel processors, ample memory and solid state drives (SSD).

As with the previous Surface Pro model, the screen is 12.3 inches diagonally, boasting a super high resolution of 2736 x 1824. This screen size represents a sweet spot for both portability and usability, in our opinion.

One difference is that you can now push the kickstand on the back of the new Surface Pro much further. Microsoft says this model can in fact now lean back as far as 165 degrees. That doesn’t make it any easier to use on your lap, but it could make it easier to use as a digital canvas like the Surface Studio.

The other main difference is that two-entry level models use passive cooling. That means they should make less noise in operation than before as they do not use a fan to cool down.

The biggest technical improvement, if Microsoft’s claims are true, should be battery life, with the new Surface Pro apparently providing up to 13.5 hours of battery life. As a comparison, Microsoft used to advertise 9 hours with the Surface Pro 4.

The port situation, however, is exactly the same. For example, there is a magnetic charging port, a mini DisplayPort, one USB 3.0 port, a microSD card and a headphone jack. As before, you can connect your Surface Pro to an external monitor if desired.

One surprising omission is that Microsoft does not include a USB-C port with their latest model because they do not think the technology has matured enough yet. A dongle will be introduced later on though. LTE support will however, be added to some models, allowing buyers to connect to mobile internet on the go. 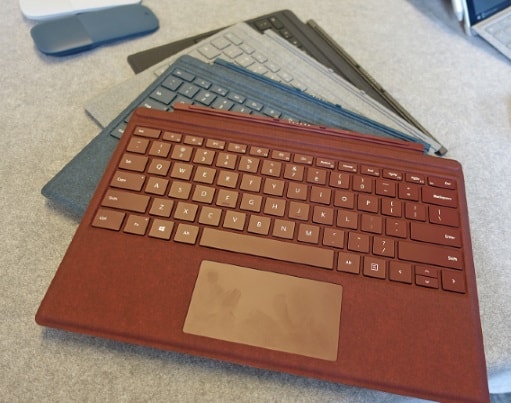 The cover/keyboard, which has always been sold separately, comes in various colours and can now even be purchased with Alcantara fabric.

What Do We Think?

In summary, we are impressed with the specification of Microsoft’s new Surface Pro and expect it will be popular with many business users that are frequently working remotely. Of course, all these features and technology do come at a price, especially if you opt for the top spec i7 version with 16GB of memory and 1TB SSD. However, if you would like a PC offering the best combination of quality, performance and portability, look no further.

Please contact Vantage IT today if you would like to enquire about one of these devices, or require advise for your PC requirements.